skip to main | skip to sidebar

I Blog at a new service that's work friendly.

But I've already landed at a new home for blogging that's a little more work friendly.

Future, and more posting, will be done at the Kinless' Chronicles someplace else.

P.S. Last Kara raid I landed Msaker the Eternium Greathelm and the King's Defender. Sweet.
as relayed by Kinless at 12:40 AM 18 comments:

I remember way back when my guild on Smolderthorn first started running Molten Core. We weren't the first in MC, but we were there with the raiders. We were raiders. That guild moved up to be in the top 3 for progress on the server.

But those first times into MC, whoa. We had the advantage of some strategies that had been posted. So we knew things to do, what not to do. And we had decent gear. But, man, it was tough. Though giants and those dogs, and the imps, my god, the imps. Nevermind the bosses.

But, eventually, we'd gotten MC down to a one night affair, done in under 4 hours. Easy purples.

As of last night there is a new raider in my stable. Msaker. His first foray into Karazhan.

The rest had been there a few times now. Not all geared up. But there's a few purples, out of Karazhan, on the rest of them. And gear bought with badges out of the heroics.

Anyway, it's my first time, and I'm the off-tank. That means I tanked Midnight, double-tanked Moroes, and tanked Julianna from the Opera event. I think we had one wipe. Our raid makeup was 2 Warriors, 2 Shadow Priests, a Holy Priest, a Resto Shaman, a Holy Paladin, 2 Rogues, and a Warlock. So we had plenty of shackles, great healing, and good melee DPS. We stopped before the Maiden since they said that required ranged DPS and we had too little of that. No Mage or Hunter.

It was mostly a Rogue night with a lot of leather dropping. (Just like Molten Core!)

But, woot, what a blast. That was a lot of fun. And for my first time I'm certainly glad I got to go with capable and competent people. 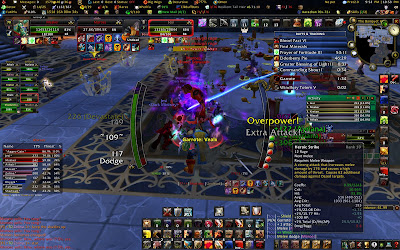 Everything old made new again.

My little polls showing, so far, most folks that visit here and respond to polls, wished there was more 20-60 content. And more land to explore. And then some new classes, and interestingly *not* new races, to round out what my readers want.

(The top two were my two votes too.)

New lands. It's so hard to believe Blizzard will drop a new (Northrend) 1/3 of the land area of old Azeroth onto the world and make it 68-80 zones.

If any of you read about the greater Azeroth, there's lands still out there we can't visit, but do exist in the lore. Undermine and all the islands of the southern seas. Kul Tiras, Crestfall, the Maelstrom, Gilneas. There's lots of places to be added yet. And not all of them need to be level 90-100.

And why not change some of the old quests. Mix it up some. Take those old 20-60 quests, all those silly gathering and run here and there quests, and change them a bit. Make them new. And give the quest givers some new stuff to offer to do for them.

How about a whole "Prepare for Northrend" theme where folks level 20-70 get Azerothian quests that point towards Northrend and our interaction with it.

Well, work calls (and Blogspot is blocked at work) so that's it for now.

In other news before I go, Zug zug.

Msaker's been active, tanking Shattered Halls for the first time he'd ever been there, and only 3 deaths. Two on the boss who can't be taunted. He picked up the razor's edge helm, the style originally on the Tier 2 that Onyxia dropped. Finally a helm I don't mind showing the graphics on again. Lok'tar.


Blackhoof's been healing in the battlegrounds. I guess to build up honor for the day the Arena sets go on sale to the general public. Since I'm not an AFK cave camper the amount of honor I can earn a day isn't really that high. (AFKers earn 10-20 thousand honor a day. What's your honor income?)
as relayed by Kinless at 11:46 AM 14 comments:

I'd apologize for the past we got, but the future could have been worse.

A guildie, two ex-guildies, one of their hunter guildies, and me. They aren't even in the same guild, these two ex-guildies, but we hooked up and went to Black Morass and got the quests done. A couple of us got our Master's Key. Msaker got his Legplates of the Bold off Aeonus, a dragon of the Infinite Dragonflight. Seemed he was somewhat finite after all. And that's 2 pieces of "the Bold" for him now.

The main healer was a Resto Shaman, and the Shadow Priest was kicking out healing as she did DPS, so we were never hurting. And Not a single loss. Nice. The guildie, a Rogue, did the damage. I tanked, naturally. And the Hunter handled the adds. Impressive.

Oh, yeah, I apologize for the future that came. 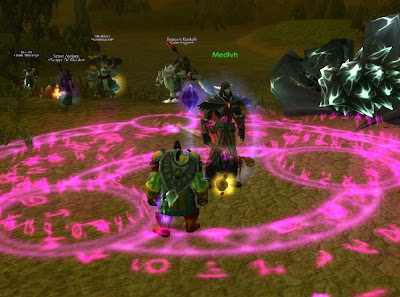 But, they say it's better than the future that didn't.
as relayed by Kinless at 1:58 PM 9 comments:

Now I found I needed to add my characters so that they appeared. If you're checking out Gankbang and don't find yourself, and you're level 70, don't forget that you might need to add yourself to the database.

Other things I found interesting at Gankbang: Their numbers would indicate Shamans are the least popular class. Followed by Paladins and then Druids. Warriors, Mages, and, if you can believe it, Priests round out the top 3. (Where are all those Priests when you need them???)

Least popular classes for the Horde are Paladin, Druid, then Shaman. Least popular for the Alliance are Shamans, Warlocks, and Druids.

Warriors are the most popular for both, followed by Mages for both.

Hunters edge out Priests for 3rd spot for the Alliance. Whereas for Horde, Hunters are bypassed by Rogues, Warlocks, and Priests. They only beat out Shamans. Interesting.

Blackhoof got off his Tauren cowhide seat and flew out to Skettis to do his daily quest. What? The Dwarf had nothing to say to him. Doh. He needed to kill some Ogres first. Twenty of them in fact.

Back to Shattrath and a trip above Aldor Rise to where the Ogres are. Being a Resto specced Shaman, and having been in an Outlands instance, oh, four times, he was kind of the wrong spec for this lifestyle. Shield in one three fingered hand, and a Nexus Claw in the other, he took on Ogres one at a time. (Which is possible since they aren't linked.) Every battle saw him at about 1/3-1/4 health when it was over. Don the healing gear (600 or so +Healing), recover, then reequip the fighing gear (950 or so +Attack Power), and move to the next Ogre.

Then I thought: "Well, hell. This sucks." I went ahead and did the daily quest anyway. The birds managed to knock me off my mount twice. And fighting them was like pushing a wet noodle around. But, I finished that too.

(Reminds me of way back when I was gumming STV Trolls to death. Full Resto. BUT I did manage to leave a Human Paladin, same level, for dead anyway, after he killed my guildies Warlock alt. Ah, life on a PvP server.)

Then I thought: "Enough." Ported back to Shattrath and hopped into the portal back home to Kalimdor, to pay the Shaman Trainer in Orgrimmar a visit.

Did I want to relearn my talents? Yes. Did I want to pay 15 gold to do so? No. Argh! Take it anyway. Reset my talents for the Enhancement plus a little Resto life.

Then I get invited into a group to go to Steamvaults. I can knock out three things there. I can get the Warlord's head. I can pick up the orders for Lady V. And I can get my key fragment. But I'm Enhancement, not Resto.

The party, guild, consisted of a Warrior all in purples. Nice. He knew it. He had purples in his bag he wasn't using. Nice. I've got purples too. :) They're all level 60 though. :(

Anyway, the Warrior is excellently geared. A Rogue. Our guild's 2nd-in-command, a Warlock. Another Shaman, and me.

This other Shaman I assumed was Resto. Isn't everyone used to instancing Resto? But, no. He was Enhancement. Great. Was he going to heal? Uh, no. He didn't have gear to heal, only fight. I checked out his gear. 350 or so +Attack Power. Hmmm. Was that his Healing set perhaps? No. 22 +Healing. Oh, good lord. He was going to help DPS. I was the healer.

The Warrior was great. The Rogue, not a problem. The Shaman? Like a teen going down at an R. Kelly party. Aggro management. (Or use a shield.)

We got my key fragment. But after several tries at the Hydromancer we called it.

Okay. So that's out. I returned to Orgrimmar and respecced back to Resto. And spent the rest of the night working on my cooking skill. (Completed the Gadgetzan quest to raise my cooking limit to 300.) I did that because as an Alchemist I should be able to produce potions and foods that provide effects and buffs. There's two nice recipes I picked up in Blades Edge, but my Cooking, still, remains too low to take advantage of it.

P.S. Msaker, in Defense gear and stance, never gets knocked off his mount by the birds of Skettis. Does the dismount occur upon being critted, and being uncrittable makes me immune to that?
as relayed by Kinless at 2:54 PM 17 comments:

On Steamwheedle Cartel (RP) - Home of the Alts

: a variable gaming condition that appears by character number five and is characterized by impairment of the ability to reach higher levels, an impairment in joining end-game content, failure to maintain normal levels of reputation and faction gain, and by an inability to be forced into stereotyped playing patterns. <"Dude, l2lvl." "Can't. I've got altism.">

Kinless
Not so Kinless anymore.